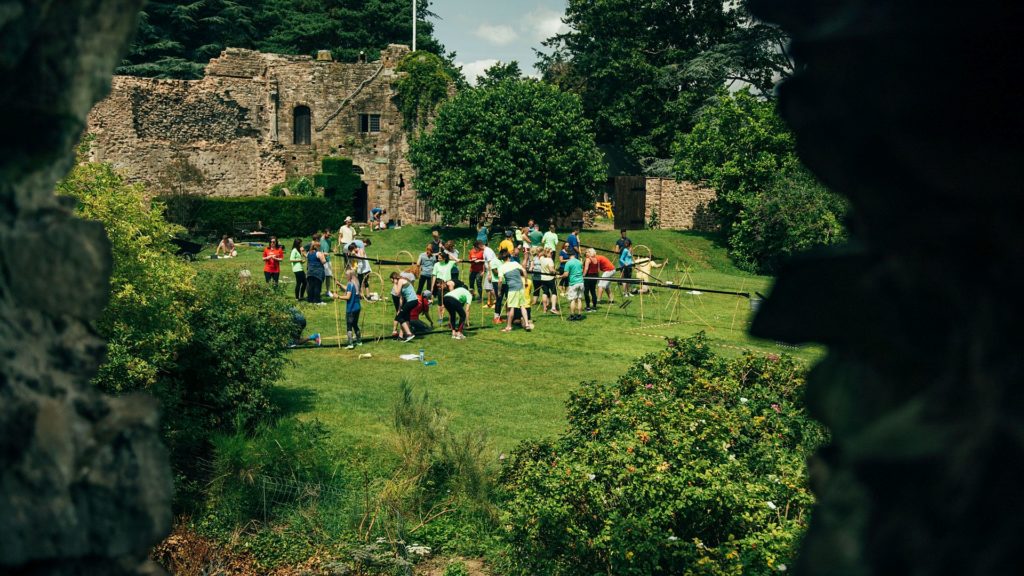 On one of those lovely sunny days that we had this July, team ForrestBrown upped sticks from Bristol and set off over the Severn Bridge. Historic Usk Castle was the destination, and 24 hours of engaging team-building was the purpose.

What happened next was fun, challenging and at times touching. And remarkably, given that we were in Wales, it didn’t rain once. Here’s what we got up to: 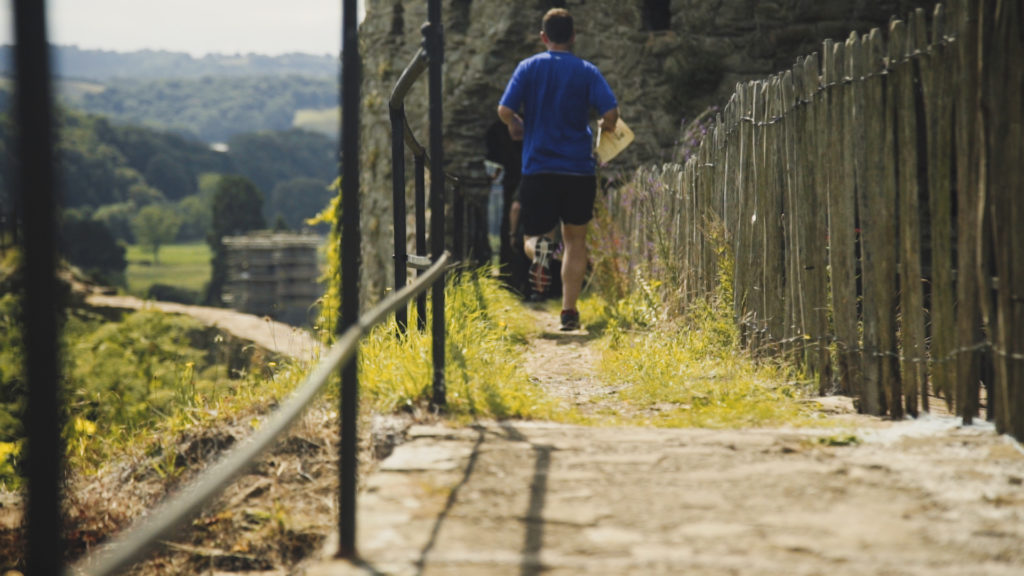 Our eager teams were given 50 minutes to complete a treasure hunt with a twist. 16 checkpoints were hidden throughout the castle grounds. Each had a playing card that needed to be matched to another, and an electronic Sportident station, able to sense the exact time it was triggered.

Every team was asked to sub-divide themselves in two at their own discretion, and was provided with two electronic triggering devices. These smaller units then had to find the checkpoints with matching cards and work out a way to electronically check-in simultaneously. This tested effective communication strategies as the matching checkpoints were not in clear lines of sight with each other. 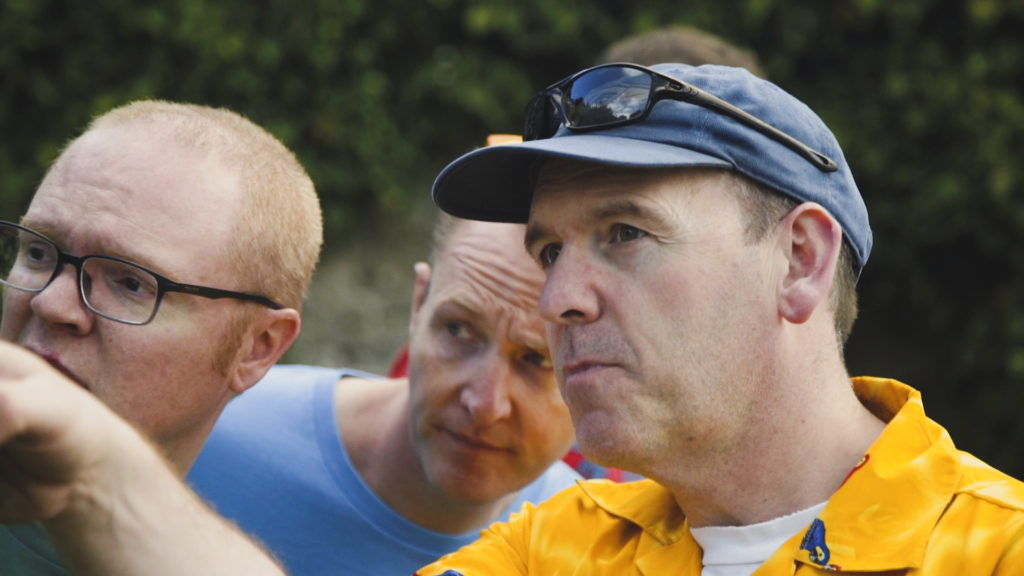 The sub-teams created during split decision were retained, but were now joined up with new sub-teams. This transformed one-time adversaries into allies, turning the day’s dynamics on its head.

In this challenge, the new teams had to work out which day the North Tower of Usk Castle was completed. To solve the problem, clues were hidden around the castle. A strong level of logic and mathematical reasoning was required, as well as time-management. It was a race to see which team would come up with the correct answer first. 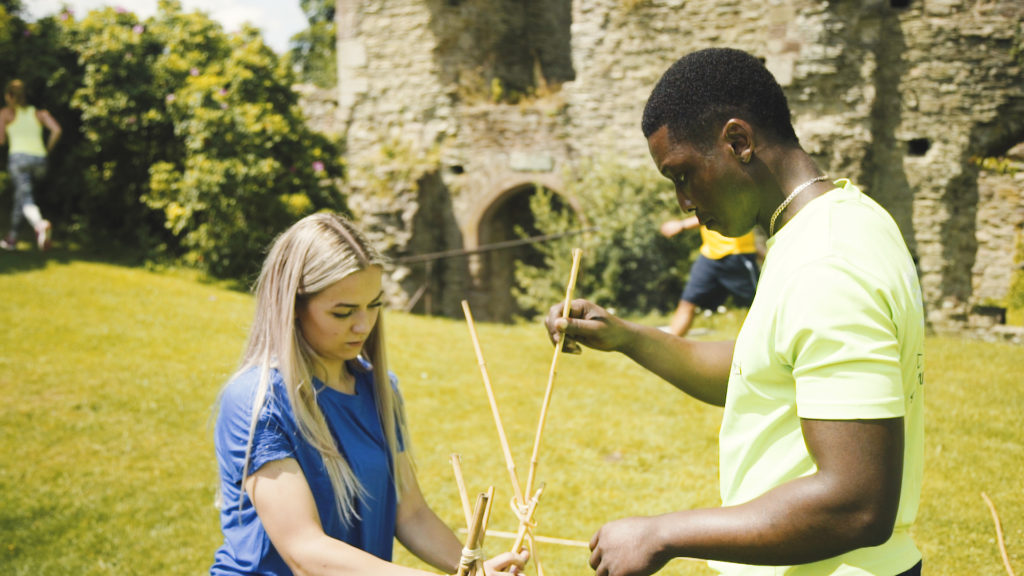 It was now all out warfare. Well, not quite, but medieval weaponry did come into play. Two new team formations were created from the existing sub-teams. And they went head to head to design and build siege machines: a catapult, trebuchet or ballista. The goal was to see who could hurl a cannonball-lite the furthest.

This task challenged each team’s, creativity, design ability and efficiency in allocating roles to achieve maximum potential. Lisa-Marie’s team ‘won’ comfortably, hurling the projectile in excess of 30 metres. The result was however called into question as it appeared to have been achieved five seconds after the final whistle. But let’s face it. Who’s going to argue with Lisa-Marie when she is wielding a fully operational catapult?

Only the grand finale remained to be completed. Throughout the tasks, teams had been competing to earn marbles. In this final challenge, each team had to construct a viaduct to channel their accumulated marbles to the scales.

When the scales tipped, an explosion was triggered revealing the prize: a case of fine wine.

Helping innovative businesses in exciting industries to grow, ForrestBrown-ers share in a common purpose and it turns out, these challenges had been designed with that in mind all along. What had started off as team pitted against team quickly developed into teams co-working with each other to accumulate the required marbles for a group win.

Furthermore, many of the skills developed and scenarios explored could be translated back into the office environment – not the catapults! Helping ForrestBrown-ers see the bigger picture, when working on their own projects. Dealing with complexity, ambiguity and tight deadlines. Trying alternative approaches. And targeted personal development and goal completion.

Unwinding around the campfire 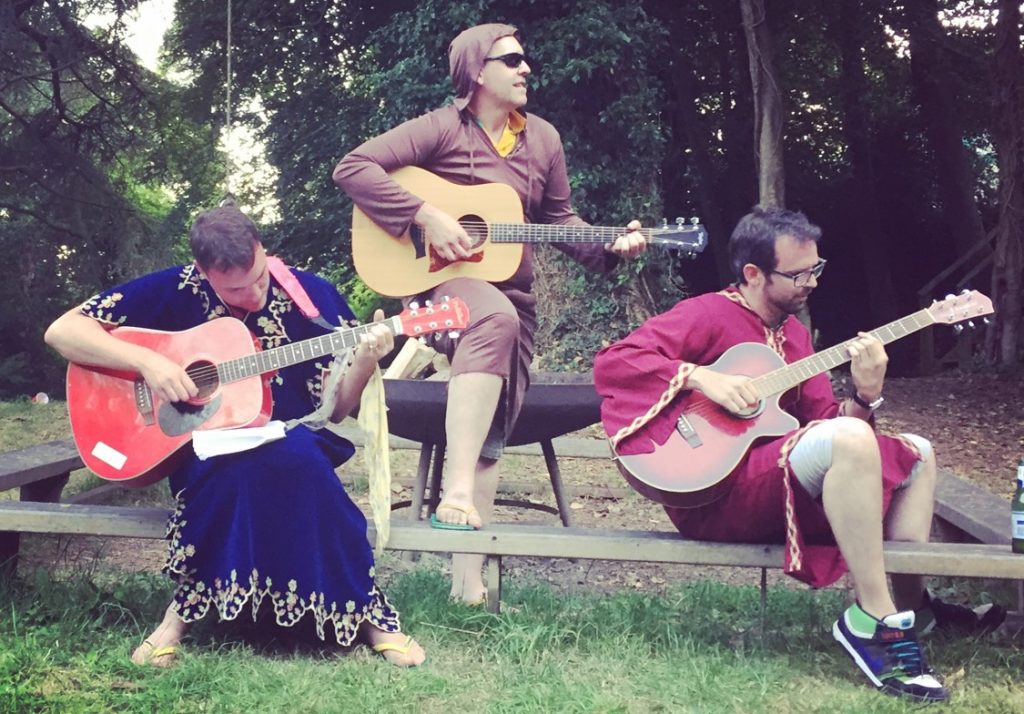 With long shadows cast amongst the Usk castle ruins, a mighty bonfire was lit and the team enjoyed a hog roast. Al, Graham and Paul didn’t need much persuading to pull out their guitars and they even found some medieval clothing to complete their look. Then, what some people might call ‘singing’ took place.

There is a poet in the ForrestBrown midst, Olly. He had written some verse reflecting on what it means to work at ForrestBrown. A silence descended as he recited his work, before we all retired to our yurts, ready for bed after a busy day.

Evergreen
– for ForrestBrown, by Olly

A forest made of many trees
was once a plot of just a few –
its subtle presence quickly grew
from strength to strength and further still,
beyond its field’s boundaries,

a dense woodland was in view.
Its colours and varieties
made it distinct, and full of life.
And every tree had space to grow,
to reach and exceed its greatest heights.

In a landscape that was always changing
the trees were deep-rooted and far-ranging.
Their collective colour would show
new definitions in what it could mean
to be always in season – and evergreen.

I’ve been at ForrestBrown on a work experience placement over the summer. I’m doing a marketing degree at Oxford Brookes at present. So as a bit of an outsider to the company, I have a different perspective. What can I say… ForrestBrown have welcomed me with a generosity of spirit, have given me interesting and useful projects to work on, and have helped me develop professionally. There is a bubbling energy about the place, and it’s clearly a fantastic place to work.

We’re always on the lookout for new talent. If you’re a tax professional and thinking ‘where next?’, we’d love to hear from you.